Skip to content
An Exploring South African Things to do in Cape Town, the Helderberg, and the Cape Winelands
General Nonsense

A Puppy with Heart

A person should always make time for all the wonderful weird and wacky stuff that goes on in this world (how’s that for excessive use of words beginning with a ‘w’?) 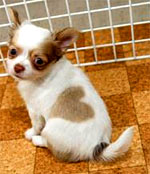 A chihuahua puppy has become Japan’s latest heart throb after he was born with a heart shaped mark on his coat.

The dog, named “Heart kun”, was born on May 18 at a pet store in Northern Odate. Shop owner Emiko Sakurada, who bred over 1 000 puppies, believes his unusual markings have brought her luck.

“Since Heart kun was born, not only I, but also many people who see him are getting luckier,” Sakurada said.

The dog became a celebrity after a local television station aired pictures of him. Since then, Sakurada has been flooded with calls from people wanting to buy him, which she has turned down.

“It may sound strange but since I saw him, my luck has been picking up. I won the lottery and won a concert ticket. That must have been thanks to the power of Heart kun,” said Sakurada’s sister, Maki Matsuyama.

Japan is a dog loving nation. Earlier this year, an old dogs’ home and a gym dedicated to exercising canines opened for business.

All the Best Laid Plans…