This piece of cover art is being put up here because I fondly remember owning the comic book back in my late teens and early twenties when my 7th floor apartment’s one corner was pretty much overrun by my comic book collection.

If you have never heard of it, Continuity Publishing, also known as Continuity Comics, was an American independent comic book company formed by Neal Adams in 1984, publishing comics until 1994. Samuree: Mistress of the Martial Arts was one of the titles published by Continuity, created by Neal Adams and then continued by writers Elliot S. Maggin and Peter Stone for its initial nine issue run. Although over the course of the nine issues a number of artists were used for the interior art, Mark Beachum is probably the primary artist associated with Samuree, in part to all his interior work, but most definitely for his eye-catching (rather 80’s styled if you look at them now) covers.

As for who Mark Beachum is, well he is an American comic book and multi-media artist known for his highly eroticized renditions of female super heroines such as Flare and Samuree. Right.

In any event, here is the pretty cool cover art featured on issue four of the original Samuree: Mistress of the Martial Arts comic book: 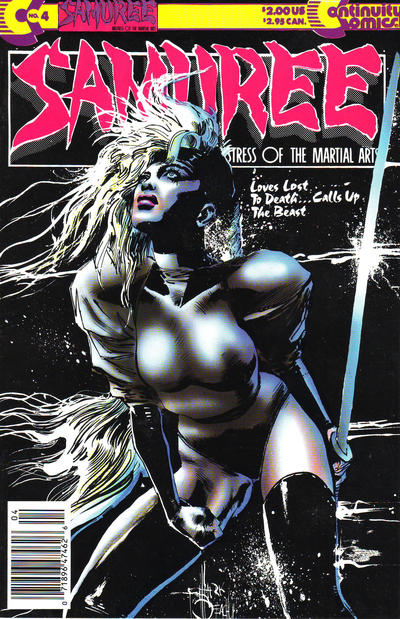