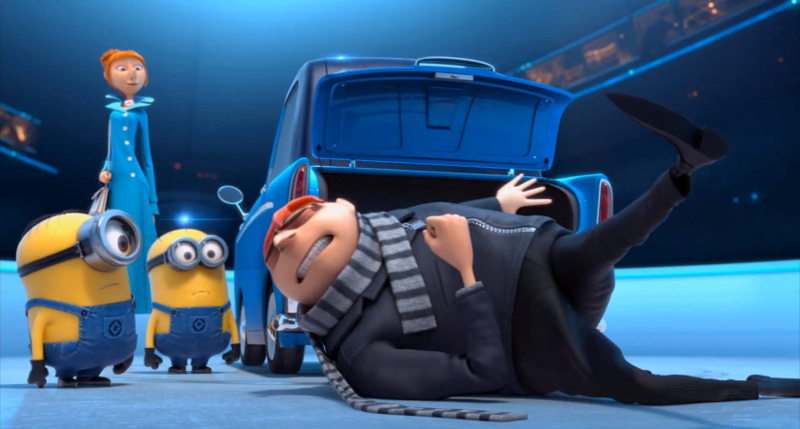 An entire secret laboratory near the Arctic Circle is stolen by persons unknown, leaving the Anti-Villain League little choice but to turn to former super-villan Gru, now a kindly jam and jelly manufacturer, to try and identify the nefarious villain before it is too late. The stolen mutagen PX-41 poses a grave threat and it is up to a rather reluctant Gru and super keen AVL agent Lucy Wilde to finger the suspect while working out from under the cover of their cupcake deli front, Bake My Day.

Three daughters, staff issues, disappearing minions, separation of love-struck teenagers, surviving disastrous blind dates, and not to mention a rather surprise blast from the past, Gru certainly has far more than any former super villain should have on their plate!

I quite enjoyed the first Despicable Me outing, finding the balance between clever humour, outright silliness and heartstrings-tugging moments to be pretty much perfect, easily catering to both young and older viewers alike, and pleasingly I have to say I rather enjoyed this sequel – despite the fact that I’ve kind of reached that point in my life where I no longer really enjoy animated features as much as I used to. Damn growing up.

Although not quite as emotionally touching as the first outing (but hey, this is a sequel, and we all know that sequels can never surpass the original), Despicable Me 2 hits all the right notes when it comes to clever writing, some great little ‘twists’, and loads slapstick humour loaded with some sneaky wit.

It’s slickly animated, oh so colourful and likeable, and as per usual the minions almost steal the show – honestly, the Backstreet Boys number at the end nearly killed me! :)

The soundtrack is fun, and the voice cast all do a fantastic job, in particular Steve Carell as Gru and
Benjamin Bratt as Eduardo Perez.

All in all, there is absolutely no chance of your kids NOT loving this one, and even better still, its worthwhile to sit down and watch it with them, because you’ll be guaranteed of more than just one laugh yourself!