In 1787, Japan is in a state of chaos as war rages on. At the decisive battle of Shimbara, The Holy Warriors battle together with the peasants against the tyranny of the shoguns. However, the peasants turn on one of their leaders, cutting her down in battle.

Amakusu Shirou then betrayed the other six members of the holy warriors by selling her soul to the demon Ambosia. The remaining holy warriors, led by Haohmaru, lead a final attack against Amakusu, but they end up losing their lives against this great evil. At the last minute though, their souls escape, to be reborn one hundred years later. This stops Amakusu’s plans, and she is forced to prepare for their reincarnation.

One hundred years later, Japan seems to be in peace. Haohmaru has been reborn, but he has no knowledge of his past. However his fighting skill and strength are still present. The other five holy warriors have already gotten together with their memories, and are seaching for Haohmaru. Amakusu is also preparing for the coming of the holy warriors, and sends her warriors out to search for them.

As Haohmaru’s village is attacked and burned, his mother killed before him, his rage slowly begins to ignite. The other five holy warriors find him – but it might be too late. Engulfed in his rage, Haohmaru heads of Amakusu – and straight into her trap.

Can the remaining holy warriors free Haohmaru from himself and together destroy this timeless evil? Once more the people will have to rise up and fight for their freedom from oppression. The battle between good and evil continues again.

The story has very poor pacing and feels simply too rushed. The characters are left pretty two-dimensional, and if you aren’t familiar with the game then you won’t know a thing about them or their abilities.

In truth much of the story revolves around fight scenes. The lead character has to fight his own rage in order to learn that only through teamwork can he defeat the great evil that besets them. It’s pretty much popcorn stuff.

The animation isn’t bad though. The characters are bright and vibrant, and there is enough detail in the animation to satisfy.

Unfortunately I only managed to see the dubbed version of the movie. The English voice-acting is… atrocious. Really not very good. I have no idea why they had to put such corny accents on the characters, especially Charlotte.

Overall, this isn’t a masterpiece. It is the kind of movie left running in the background of an anime fair. Still, if you are a fan of the old arcade game, then maybe you’ll get a kick out of seeing your favourite characters on the screen. For people looking for an engrossing, funny or serious anime – look elsewhere. 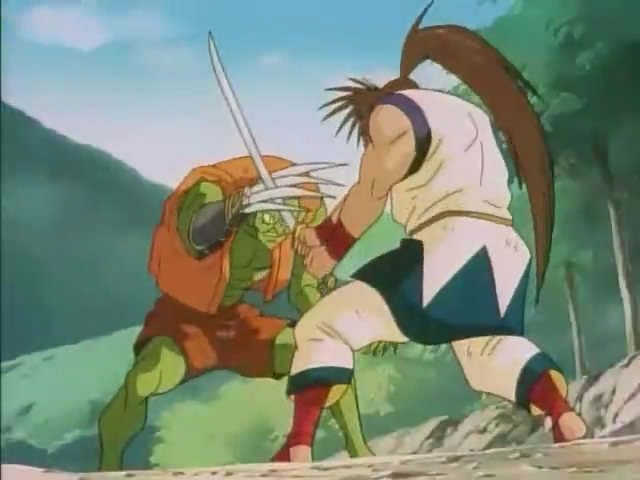 (Historical Note: This was written back in February 2004. Thankfully my writing has improved greatly since then.)