I spotted on Facebook that the Century City Natural Goods Market was at last kicking off for the 2016 Summer Season, and seeing as we had in the past spent quite a few Sundays selling cupcakes there as part of the Chantelle’s Cupcakery food markets phase a couple of years back, I was eager to head out that way and catch some of that good old nostalgia vibe.

Getting the girls on board was remarkably easy of course – just one mention of the Temperance Flyer mini train being at the market was more than enough to have them jumping up and down with excitement!

As always, the market was being held on the big green circular Central Park in the heart of Century City, right next to Railroad Square and of course Intaka Island.

The main trading action was all taking place under a large central Bedouin tent, with the other food trucks/trailers being accommodated along the wings of the market space. There was plenty of shaded seating and tables available (all very popular due to the great Summer’s weather on the day), with live music coming courtesy from the talented Capetonian singer Ryan Kidwell (former front man of the reggae outfit The Little Kings).

For the kids, there was a magic show courtesy of family magician Magic Nick (which sadly we missed due to arriving too late), a jumping castle, a zorb orb, and of course the Temperance Flyer train!

Interestingly enough though, and I’m not sure if it is just because it was the first market of the Summer Season or perhaps an indication of something else, the market certainly seemed a LOT smaller than what it used to be in terms of the number of traders on the day.

Sadly, this then meant that there wasn’t a heck of a lot of cool/interesting food choices on offer (like say what you might find at the bigger market cousins like the massive Root 44 or Lourensford), but nevertheless, we all managed to find something that we liked and in the end had a good morning soaking up the great sun, music and vibe that one can only get from coming to an outdoor market like this!

(So, maybe worth jotting down, but come the evening of the 7th December from 4 to 9pm, they will be having their first ever Summer Night Market which could be pretty cool to attend as well!) 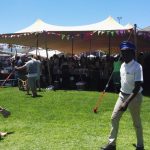 Having enjoyed our time spent at the Century City Natural Goods Market then, we next headed down the road to the gigantic Canal Walk shopping mall, literally the first time in years since I’ve last been there. (We don’t come through to this side of Cape Town much in case you were wondering!)

It is as always, an easy on the eye shopping centre, one of the nicest in terms of both architecture and design, though we didn’t have all that much time to admire our surroundings because Chantelle was pretty much focussed entirely on one very important mission – locating the newly opened Lindt boutique chocolate store ASAP!

Seventh heaven for any lover of Lindt let me tell you, especially because you can buy flavours there that you can’t normally find on the retailer shelves. (Amazingly enough, Chantelle actually shared her Lindt haul with both the girls and myself. Talk about true love! :P)

(Oh, she wanted to check out Dunkin’ Donuts as well, but they were far too busy for us to be bothered with trying their stuff out. Plus, I was rather pleased to see that Baskin Robbins is hitting South Africa in the near future as well. I LOVED checking out all their ice cream flavours during my Japan 2014 trip!).

Anyway, here’s a handy map to Central Park if you want to catch the next Century City Natural Goods Market!