In case you were wondering who holds the current Guinness World Record for being the smallest ostrich in the world, the answer is Tom Thumb, the 127 cm tall, fully grown, adult male African ostrich that finds itself living in Philadelphia, or more accurately on the premises of the Cape Town Ostrich Ranch in Philadelphia (the Western Cape one, not the Rocky Balboa USA one).

As for the Cape Town Ostrich Ranch (which truthfully is in fact around 20 minutes from Cape Town), it has been on the Cape Town tourist map for many years now, with this show ranch offering a great ostrich-centered experience that includes guided tours, a simple ostrich museum/information center, ostrich item shop, and of course a restaurant with a menu that naturally includes ostrich on it.

In addition to the expected information overload, the tour has all the ostrich essentials packed in, like hand feeding, baby watching, ostrich egg standing, Tom Thumb petting, feather scouting, and for the smaller ones among us, ostrich sitting.

I took the girls for their first ever visit to the Cape Town Ostrich Ranch in January, and pleasingly they rather enjoyed themselves (though that could have just been because of ostrich feathers our guide insisted on giving to the girls).

Actually, I rather enjoyed myself too. There was a lot of space, the restaurant food was pretty good, and more importantly, the onsite craft beer producer Gijima Brewery has some rather fine brews.

(Oh, and it was a surprise to spot a couple of cheetahs from our own local Cheetah Outreach Somerset West sanctuary chilling on the grounds as well.)

Also, the ostriches seemed to take quite a liking to Jessica for some or other reason. Lots of feather flashing, courting dances were performed!

As a family outing option, this is a bit on the expensive side, but it does make for a good day out, so no complaints from me there. 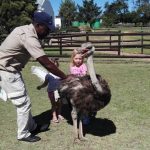 So, if for some or other reason you haven’t come across an ostrich before, this tourist friendly spot definitely won’t let you down.