Now that she is more or less old enough to play, I suspect that this might now become a thing whenever I find myself down in Mossel Bay with the eldest munchkin in tow – putt putt at Fanta Sea at The Point.

This particular round of mini golf happened as part of our lovely December holiday getaway, though funnily enough, Jessica and I had actually already played at Fanta Sea back in March. Thing is – all of a sudden the joint was sporting a burst of color and a whole lot of upgrades since we last were there, plus this time around we had both Chantelle and Emily to watch us in action!

(Also, it was believe it or not, quieter than what it had been in March – that Buffalo Biker Rally of the Nomads Motorcycle Club sure knows how to pile the people in here at Mossel Bay! I suspect though that we were somewhat lucky, perhaps most of the Christmas holiday crowd had already packed up and headed off before we finally made the time to come down for a game.)

Anyway, as I mentioned last time, the downside to playing at Fanta Sea with smaller kids is that they only have the adult length putters available, making it pretty difficult for Jessica to play 100% properly – and near impossible for Emily who is still way too small. (Not that that stopped her grabbing a putter and trying of course!)

The weather was good, the putt putt rather nice, and pretty much everyone put in one or two quite excellent shots. I can’t remember exactly, but I’m pretty sure that my mom managed to sink the most hole-in-ones on the day. 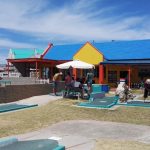 Fanta Sea at The Point is actually a great spot for families with young kids. Putt Putt, skateboarding, a jungle gym play area, light meals, splash pool, car rides, ice cream – there is more than enough here to keep the young ones happy for a fair bit!