We don’t really create large scale monuments any more (makes sense, they’re expensive and usually only relevant to a small slice of the population), but I do find that a pity because I rather enjoy the spectacle of a well designed monument space.

For me, the Huguenot Monument in Franschhoek is a thing of absolute, tranquil beauty. The distinctive arches that frames the strong central character, the flanking pillars of the colonnade, and the reflective pool all combine to create a striking vision, with the large manicured lawns ensuring that the elegant monument stands central to the scene.

Inaugurated in 1948, the monument, designed by J.C. Jongens, honours the Huguenot’s who, fleeing religious persecution back in France, arrived in the country between the years 1683 and 1756 and primarily hunkered down in the valley of Franschhoek (literally “French Corner”).

It was here then that the French Huguenots settled, built farms, produced wines, and impressed their culture onto the area, leaving a huge mark on colonial South African life, and indeed, leaving a legacy which to this day survives in what is undoubtedly the premier wine producing region of South Africa.

The monument itself is dripping with symbolism: the three great arches represent the Holy Trinity, above from which the Sun of Righteousness shines, topped by the Cross of the Christian faith. The central female figure (created by Coert Steynberg) is meant to personify religious freedom, with a bible in her one hand and a broken chain in the other. Her cloak of oppression is being cast off as she stands upon the globe symbolising her religious freedom. The fleur-de-lis on her robe represents a noble spirit and character.

The still, reflecting water pond below expresses tranquility of mind and spiritual peace, important considering the strife and conflict the Huguenots had experienced back in France.

In addition to the monument, on the grounds next door stands the Huguenot Museum, itself with a rather interesting story to tell. It used to be the elegant home of Baron Willem Ferdinand van Reede van Oudtshoorn, which had been erected around 1791 in Cape Town.

Despite all attempts to save it, the historic building was demolished in 1954, but not before an agreement was reached to use it as a French Huguenot museum. So each brick and stone was numbered, and transported from Cape Town to Franschhoek, where it was erected exactly how it had originally stood, complete with its original decorations intact.

As interesting as a stroll through the museum would have been, this particular visit to the monument had the kids along for the ride, which of course then meant that while open spaces with a boring building but interesting lizards was tolerable enough for them, a visit to a dusty old museum was definitely not on their acceptable things to do for the day!

Still, I got plenty of pictures from what was a quiet, peaceful experience: 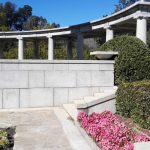 As with most monuments, the Huguenot Monument is best experienced when there are few or no other people around – a certain level of quiet is needed to truly experience the surreal tranquility of this beautiful space in the Franschhoek valley.

Photo Gallery, Things to See and Do