Following Johann’s and my stroll around the Cabrillo National Monument park, we next headed down to San Diego’s harbour district, with our sights firmly set on what was without a doubt the highlight of #USA2016 for me – a visit aboard the USS Midway aircraft carrier museum.

Growing up I had an absolute fascination with military planes, spending hours sketching them, reading about them, building model kits of them – so essentially (thanks to the cornucopia of naval fighters on display) this was literally like walking into a little slice of heaven for me!

Decommissioned in the 1990’s, the USS Midway holds the distinction of being one of the United States of America’s longest-serving aircraft carriers (1945-1992), having seen action in Vietnam, served in the western Pacific and played a part in Operation Desert Storm.

Now permanently moored at San Diego’s Navy Pier, the USS Midway is a dedicated museum ship, allowing you to explore (with the help of extensive audio guides) both inside and out, whilst also housing an extensive collection of exhibits that cover everything from the crew’s sleeping quarters to the primary flight control on the bridge.

My favourite part is of course the fact that the USS Midway is home to an extensive range of naval fighter planes, with a collection that includes all the iconic American fighters and support planes stretching all the way back to World War II.

Basically, Hornet, Phantom, Intruder, Dauntless, Corsair, Avenger, Panther – they literally have them all!

The whole experience was further enhanced by the fact that the ship is teeming with volunteer veterans, eager to impart their knowledge and point out facets that you might have missed or skimmed over. Heck, we even sat through a little session on the flightdeck where we were taken through the process of how they land fighters on the ship. (Incredibly interesting, though probably not a skill that I’ll ever need to master! :D)

It is a truly wonderful experience for anyone with even the slightest of interest in military matters and I seriously have no idea as to just how many hours I dragged Johann along with me as we wandered about the aircraft carrier – but I know that given the chance, I could easily spend the entire day there!

Well, well worth the price of admission. 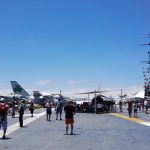 It is no wonder then that the USS Midway is ranked as being the most popular naval warship museum in the whole of the United States!

Photo Gallery, Things to See and Do